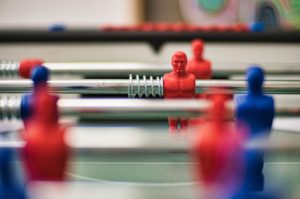 One of the most critically acclaimed books of the last decade, Soccernomics (Kuper et al) brought together two of my favourite things. A football book that eulogises the power of data.

For many years, football analysis had been hugely subjective – is this enjoyable to watch? Who’s spent the most money? Who has the ‘best’ players?, leading to a set of assumptions about what should happen on the football pitch when two teams of 11 players take to the field.

‘Big’ Sam Allardyce was, for many years, manager of ‘little Bolton’. As a long-suffering fan of the whites, I didn’t always appreciate what a data genius was in charge of my club. I read article after article about ‘anti-football’, watched interviews with rival managers bemoaning ‘rough-house’ tactics from the opposition, and yet I was watching players of the pedigree of Youri Djorkaeff, Jay Jay Okocha and Nicolas Anelka.

What was less well-known at that time was that Allardyce’s time in the now-failed NASL, he was tapping into the explosion in data science in US sport. Objectifying the game, Allardyce was able to understand the importance of set-pieces, with data showing his Bolton side scoring almost half of their goals in this way, versus the league average of one-third – whilst the subjective view was one of long-ball.

So what was so special about Allardyce’s model? Fundamentally he was loading the dice in his favour. Aware enough that his side couldn’t compete in signing the best players, he went about ‘signing’ a team of great statisticians, who worked tirelessly to understand the marginal gains, using the vast array of data made available from Prozone and Opta.

So what does this mean for organisations? It means that using subjective or objective information in isolation can drive misleading conclusions. It’s only when the two are brought together that the real power of the information at our disposal can be truly harnessed.

This is the opportunity to revolutionise the way organisations work – seamlessly blending behavioural, attitudinal and business data to drive smarter business decisions. It’s time to challenge your thinking. Don’t focus on WHY or WHAT, focus on both. If you need help in doing that, get in touch.